Tillotson Racing has started three engine packages since the Fall of 2015, the 196R, 212R, and 225RS. The latter being an original engine package created to diversify and improve 4-cycle sprint racing internationally. You and many others have been teased by the ongoing marketing and anxiously anticipating its arrival.

After years of development and a short season of racing in Ireland, the Netherlands, and a couple of demo events late last winter in the States, we finally had the first full weekend of Tillotson 225RS Racing.

Before the event, we only spent time tuning our carburetors on our dyno. We know from working and designing Tillotson carburetors for 40 years diaphragm carburetors are very finicky when attempting to idle. We wanted to make sure we had the carburetor dialed in before we went to the races. Most of what we did was to improve idle and starting. With the spirit and intention of the class, we did nothing else to the engine. This would give us useful data for how the engine performs virtually untouched.

We ran the Maxxis Series's first race at the Carolina Motorsports Park. We had an enjoyable experience with the organization and track. We would highly recommend attending. But halfway through Thursday practice after dialing in two go-karts, we found we were two seconds off the pace. This caused a bit of a panic for us. Something was drastically wrong since our ace up our sleeves was a former WKA champion. We continued to make changes to the karts and even had competitors tell us the exact gearing they were running. Still, regardless of the driving line and adjustments, we didn't pick more than a tenth.

Later that afternoon, the Tillotson reps came by to check on everyone running the class. At this point, we are fuming. Understand we burnt up tires, and almost an entire day of practice. Initially, they caught a lot of heat from us because we determined the engines were out of spec. Removing the valve cover, we discover we are not getting the lift specified by the engine fiche. This lead to an argument over carburetor settings and adjustments. Probably not their best move telling the guys with the most experience with four-cycle Tillotson carburetors but have designed almost all the Tillotson four-cycle carburetors they're wrong. We insisted that they drive both karts to verify our claims. Their driver is an experienced 2-cycle racer that weighs 50lbs less than ours. Meaning he is 50lbs less than the legal weight of our class only managed to get within half a second of our competitors. He agreed the engines were not on par.

Tillotson had engines delivered for the weekend for rental and sale. They exchanged ours for two of their engines. We ran them with their carburetor setting without changing clutches, gear, or the karts and picked up two seconds. While this put us back on track, we then had to work out chassis adjustments on worn tires that are losing their speed. We saved our new tires as most did for qualifying and the races.

While this made us competitive, it didn't solve other problems. The significant issues from the weekend not only from us or those running Maxxis but from those running at the Atlanta Motorsports Parks calling us after the weekend is the engine is difficult to start. Tillotson has a starting procedure for the engine, and even when followed, it rarely makes the engine easier to start. Their video is evidence that the engine is not easy to start. It was also very embarrassing having some laughing each time our class was on the grid looking like an aerobics class trying to start their engines. There wasn't a time when I went to the grid that the engine would start regardless of the procedure. We started going to the grid without the air filter on, knowing we would have to choke it to start.

We also had a problem with idle. This may have contributed to some of the starting issues as well. If you have ever talked to me or have read anything we have written about Tillotson carburetors, we tell you not to idle the Tillotson carburetor. This can cause many problems from bad response to unstable tuning. We had advised of this problem before the type of carburetor was decided before the first test engine was built. But never the less that was what they wanted to use. Understanding this problem is why we chose to tune and modify the carburetor on the dyno. This isn't just a problem for the class but for anyone wanting to run a Tillotson four-cycle carburetor. We had started our own R&D into resolving this issue with a couple of different solutions. But what had made it more difficult is fixing an already designed and built carburetor. The brand new carburetor and engine on my kart would idle at 3800-4000rpms. I don't consider this idling, but part throttle at this rpm and for those that idle their Tillotson carburetor often has to do the same thing.

The high idle caused many problems, especially for this type of racing with this type of engine. When setting up the clutch, we cannot get these shoe clutches to engage, slip, or disengage. The high idle creates a fuel runoff problem where the engine never decelerates to disengages the clutch allowing its to freeroll through the corners. The engine behaves as if you are still on throttle. This will prevent the kart from settling on entry and keeping it bound up. This hurts the handling of the kart and the driver's ability.

We were fed up and not getting any faster, so we chose to go back to the carburetor we had on the previous engine. We didn't do this initially because we didn't tune it for this engine and were not sure if this would only hurt the engine's performance and test the out-of-the-box performance of the 225RS engine. Our carburetor made a significant difference in the performance and starting of the engine. First, the idle came way down, allowing the clutch to work for us. It seemed to respond better off the corners. I believe because it allowed the kart to be freer and the clutch to slip that it made the carburetor better since the load on the engine had changed. It was also easier to start. Early on, the engine was starting better, and during the restart of the first race, my engine had stalled, and I was able to restart the engine myself while sitting in the kart.

As much as the engine starting had improved, it still was not easy. The fuel would not stay up on the carburetor, meaning you had to choke it frequently. We also believe the carburetor is not the only factor in its lackluster starting. The engines have not been set up or blueprinted. This was our test to check what problems may arise from off the shelf engines. When we got back from the races, we did a leak down test on the two engines; one had a 5% leak down and the other 10%. This told us we need to lap the valves at minimum or do a valve job to get the valves to seal. What may have also contributed to the sealing problem and even the starting problem is the exhaust system.

The Tillotson header is very short and uses the RLV Stock Class muffler, which is very restrictive. This is for noise control as well as aesthetics. The header and muffler are a single unit, and luckily for us, this is something the tech officials wanted to change. It is much more difficult for tech meaning it creates a massive opportunity for cheating. The fair playing field is the object for the class, but another problem with this setup is cylinder head temperature. The current header holds tremendous heat; this causes additional wear and potential for the head to warp and the valve seats not to seal. Not to mention the heat soak from running on a hot racetrack in the southeast of the United States in the summer.

So far, this has sounded pretty negative, but the engine was powerful, and after many watching our class would love to participate and buy a Tillotson 225RS engine. The engines were about 1.5-1.75 seconds slower than the vintage flathead limited modifieds on a 54-56 second track and were about 2 seconds faster than the LO206 class. This made it the best replacement for the Pro Gas class that has struggled to take off. We want success for this class but do not want our bad experience to be everyone's experience.

With a newly developed engine, there are the only two problems that can easily be fixed. Tillotson has experienced some of the difficulties themselves. They want to change to their TCT carburetors as a solution. They have one prototype in development, but the carburetor more than likely will not be ready until the Spring of 2021. Our confidence is not very high on its timely delivery. We do a lot of development ourselves, and it's not so easy developing a race-ready carburetor in 6 months. Especially considering the international COVID crisis and the time it took for the diaphragm carburetor to be designed. It also doesn't salvage the rest of 2020.

Luckily we have been anticipating the problems with the diaphragm carburetor and have been working on a solution. What we are asking for is your support in these changes. First is the header design. Before we develop the carburetor, we want to design it around the final spec. We want to use the same rules and header designs for the clone stockers but with the Limited/Open RLV Muffler. This will eliminate the excessive heat, which will extend the performance and reliability of the engine significantly. It will also make our job easier to develop the carburetor, which is the other problem. We have found improvements so far, and with the engine, we received from the race and the new header design, we are confident we can make the engine much easier to start and perform better.

Our solution will ready by the time you read this article. We are offering blueprinting services for the current carburetor. If the rest of the season goes with dimensioning problems, we can then potentially consult on a production model without changing to a different style carburetor.

The blueprinted carburetor will consist of the following changes: changing the pump stack, changing the fuel circuit, and changing the butterfly. We are not modifying or polishing the carburetor that would improve airflow but merely making the engine start and run better. We will have enough parts to build around ten carburetors before the Maxxis Series Race in Barnesville, Ga July 17-19. This should be enough to cover those that ran the first race. We will eventually have enough parts to help Atlanta Motorsports Park and Andersen Race Park Customers as well. Carburetors will be repaired on a first-come, first-served basis. While this should make a significant improvement, it's not a perfect solution. The ideal solution is for us to redesign and develop the carburetor ourselves.

To make the most of the blueprinted carburetor, you will also need:

These parts can be bought by any kart shop that races the clone or predator engines.

If you are running the Tillotson 225 Class, we're asking you to contact your track/series promoter and rule officials to let them know you are not satisfied with the starting of your engine and that EC has a solution that should be allowed to run in their series. We want this in the rules immediately, so we will have time to service carburetors before the Maxxis Race in Barnesville July 17-19. Contact Buddy Long and Randel Lyle to make these changes. 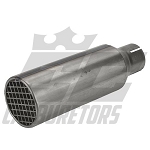 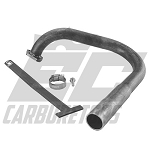 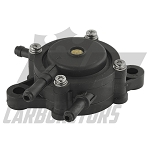