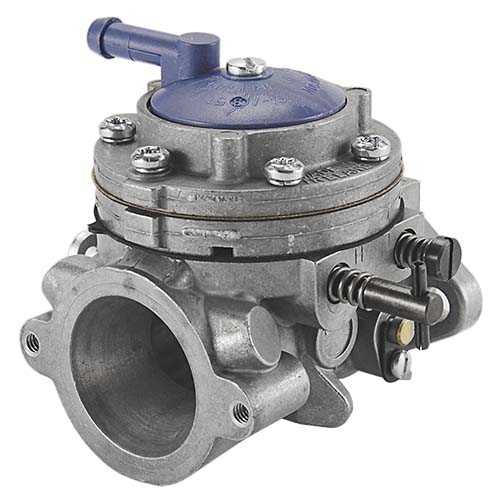 The HL-334WX has been selling since the early 2000s. We're writing this article to explain some of the histories behind the purpose and design of the carburetor. In our experience, a generation of kart racers is about 5 years. This means we have had almost 4 generations of racers that may not know why the carburetor was created or its purpose. Even for those that may have been racing since the carburetor was introduced, may find new information or details to the back story of the HL-334WX and HL-304WX.

Kart racing is a constant moving target; being around as long as we have, you do what you can to prepare for those changes. When the Briggs announced, they would no longer produce the Raptor flathead, it stirred the pot and put blood in the water. Briggs would move to support their new OHV Animal, but it allowed other manufacturers to compete in the market that was so dominated by the Briggs Flathead. Companies like Yamaha, Tecumseh, and Kohler would create a racing version of their industrial engines.

As most know in the small engine racing world, the Honda GX160/200 engines were the premier OHV engine on the market. Canada and Europe have been racing the Honda for years at this point. Chinese companies would start making copies of the Honda that would be sold through discount hardware stores where they could be bought for less than $100. Backyard racers would start racing these copies we call clones where it would catch the attention of significant kart shops. These kart shops would start importing and improving the engine with better quality parts and tighter tolerances. Rule committees and karting association would adopt the engine as the new class to help grow karting. The new OHV market put EC Carburetors in the position to create new Tillotson HL carburetors for new classes for modern engines. For the good, bad and the ugly, karting was about to go through a lot of growing pains.

One attempt to reconcile the market gave birth to the F200 class. The F200 was a fun set of rules for a new class where all the 200cc engines would compete against one another. It was exciting because it allowed engine builders room for innovations and racers to discover the best combination with many different engines. In this time Carroll, the current owner of EC Carburetors, had already started on the HL-334WX, the first Tillotson designed for these 200cc OHV engines. Carroll would also use the existing HL-348 bodies intended for the limited, modified flathead as the basis for the HL-348F and future HL-304WX carburetor. What made these carburetors unique were the first Tillotson built without a nozzle. This was supposed to be exclusive for our Tillotson designed carburetors. 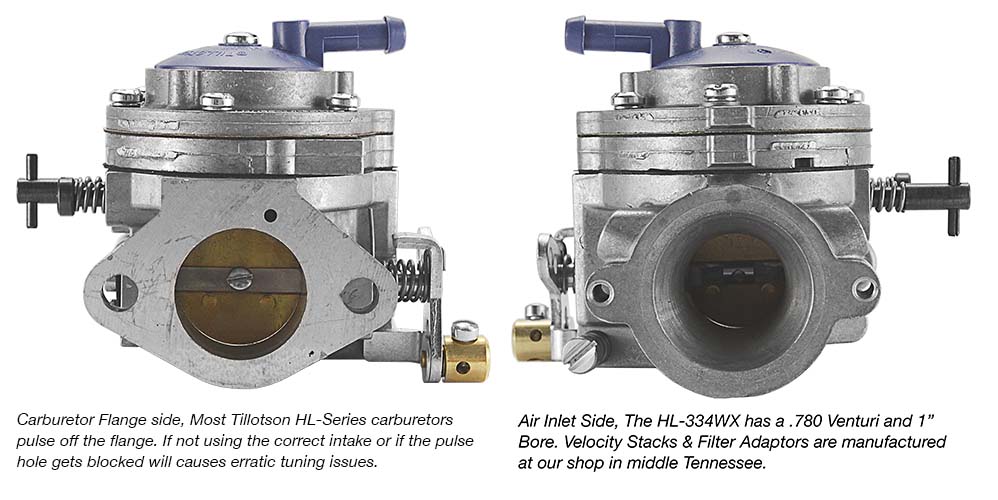 EC Birt still working and building carburetors used the HL-334WX for Burris Racing and their F200 Yamaha. Burris would convince Tillotson to copy this carburetor with minor changes, this carburetor would be called the HL-388. While it wasn't an exact copy, it still was close enough. This wasn't the first time our design was copied the HL-348C would be reproduced exactly as the HL-368A.  The HL-388 was never supported by our shop but solely by Burris Racing for the Yamaha F200 engine. The HL-388 are challenging to support not only because its an outdated copy but they're rarely sold stock and usually have different blueprints that can't be determined by the model number. The F200 was a flash in the pan. The F200 never took off or reached it's potential when it was introduced. Due to the class running on a gas platform which was not popular in the southeast and the politics to favor one engine over another.

EC Carburetors had anticipated that the OHV would replace many of the flathead classes. Those classes were 100% methanol carburetors, but this was not the case with some of the OHV engines. With so many different engines and possible classes, this would take many different HL-Series carburetors and create a logistical nightmare to stock inventory. This is part of the reason carburetors like the HL-334WX were built. Tillotson would refuse to make us a blank body that would have allowed us to create carburetors for every application. To work around this problem, we designed the HL-334wx as a lean gas circuit so that an engine or carburetor builder could build it for most OHV engines depending on the specs of the engine or class. Being that its lean and its gas it can be converted to methanol where methanol carburetors are hard to convert to gas.

If we look at the HL series or Tillotson carburetors, in general, there are 100's of models. When we designed the flathead carburetors, the models would be updated through the development of engine building techniques and technology. Instead of going through this process of updates year after year, it would be much easier to have one or two bodies that are easy to blueprint for almost any application. EC Carburetors created the HL-334WX with a .780 venturi and the HL-304WX with a .880 venturi. Both are meant for blueprinting. This fits the need for the most basic classes and engines using Tillotson carburetors.

As the Briggs Animal became the dominate OHV engine and as the limited, modified OHV and other classes stabilized we made HL-304WXG, a gas carburetor, and HL-304WXA, a methanol carburetor. The modified OHV was the predominate class to continue from the flathead days. That being the case, it made it easier for us to have HL-304 carburetors made for those wanting a bolt-on carburetor and more accessible for us to blueprint. But don't let any good deed go unpunished.

There has been a growing problem as our small engine market is changing. The rise of mini bikes and recreational hot rodders wanting more performance for their setups creates a unique challenge for us. Many newer customers hear of the fantastic performance of Tillotson carburetors on many different online forums or social media not realizing we're a primary reason for its success in the last 40 plus years. Customers without having the knowledge or communicating with us this leads them searching online used carburetors on eBay or to a large-volume, online, power sports warehouse. My advice for eBay, craigslist, swap meets, etc. is never to buy used or refurbished carburetors. Even if it's our built carburetors, the carburetor may have been further modified and/or not adequately maintained or wrong for your application. Tillotson has been on karts since karting began in the mid to late '50s and have been on virtually every engine since. This is a tempting short cut to save costs up front, but if it requires us to fix the problem, you'll be spending much more than buying a newer carburetor.

Here's a common way of looking at it, fuel management on cars is different from one to the next. A Ferrari ECM will not power and tune your Ford truck fuel management system. Carburetors are the same way each engine requires its own tune. Not just from model or design of the engine but for most combinations of the same engine. So, buying a used 1" bore carburetor for your Predator, even though it may be appropriately sized, doesn't mean the fuel circuit is supplying the engine with the correct fuel curve through the rpm range of the engine. We ask that you contact us before buying your Tillotson carburetor so we can make sure you get the correct carburetor. We are the kart shop that the pro engine builders and racers will go to for Tillotson carburetor service and where your service parts will come from. 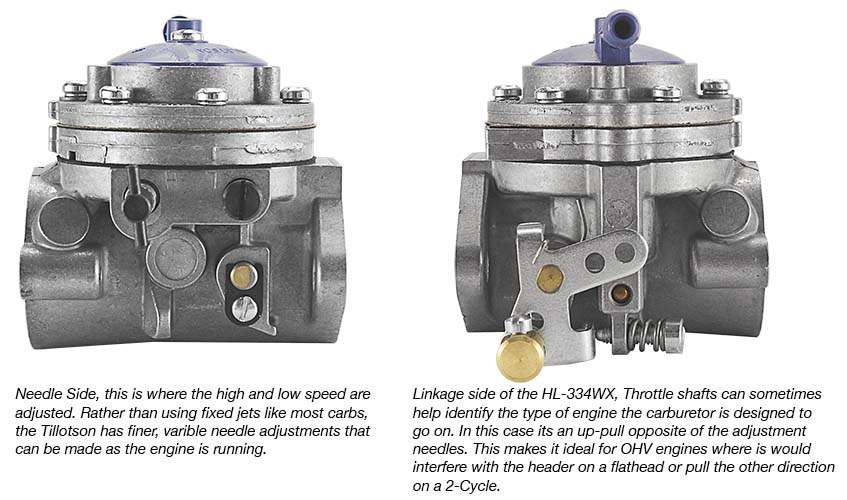 The other option is to buy new. Beware, this means you're at the mercy of the online power sports warehouses and usually their lack of knowledge. Sadly, most are more focused on sales rarely capable or motivated to help you. There is a general lack of experience with Tillotson carburetors without the magazines, the crash of sites like Bob's 4-Cycle and EC gone, there haven't been the resources to educate racers and retailers. Some carb builders and online stores will take advantage of their customers and their lack of knowledge. Some online retailers simply don't know they're making a mistake, and in this case, you have blind leading the blind. Either case is not suitable for the racer or builder making the investment in their engine. Neither have any working knowledge or experience to help you with tuning, troubleshooting, or even maintenance. The online power sports warehouses are not race shops and very few if any have any real small engine racing experience. In the case of the HL-334WX, it must be evident that none of them have run this carburetor before or possibly any Tillotson. As the Tillotson importer and designer, we're left dealing with others' mistakes and problems.

The online power sports warehouses take no responsibility for their sale and assume the technical support is the responsibility of Tillotson. However, Tillotson currently has no support team or technical office in North America. To contact them for the assistance you will need to call or email Tillotson in Ireland. Usually, this means after a few days they're sending you to us. Due to the lack of support, we're left supporting the majority of Tillotson carburetors. Unless the carburetor has come from one of our EC dealers or us, we are forced to offer minimal support so we can put our customers first. We believe it should be the responsibility of the company selling the product to help its customers.

Contact us directly if you're looking to run a Tillotson carburetor this will ensure you're getting the best support for your Tillotson carburetor, our 50 plus years of experience is cheaper than your mistakes. We sell a variety of carburetors not only Tillotsons for many applications with more in development. We will evaluate your engine, class, combination, and goals to select for you the best carburetor to get the job done.

The HL-334WX is a near-blank, engine builder's carburetor ready for blueprinting for an OHV engine but is not suited for any application out of the box. The carburetor was meant to fit the needs of typical F200 kart class or classes specifying venturi and bore sizes as a way to control the speed and performance of that class engine. Tillotson carburetor's advantages in the design are primarily for kart racing and are not always ideal for recreational or even drag racing uses. When correctly set up, the Tillotson should not idle. If the carburetor idles, it has made a sacrifice in performance based on its current design.

For Mild Race Engines running stock diameter and .280 to .310  lift, we suggest

For engines more setup for limited modified, open modified or heavily modified engines. We recommend contacting us about our Dominator or Intimidator model carburetors.

We hope you find this information informative and helps your next carburetor selection. We plan to have more technical articles soon to go more in-depth on the mechanical parts of the Tillotson carburetor. 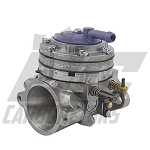 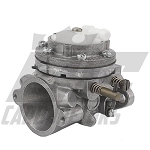